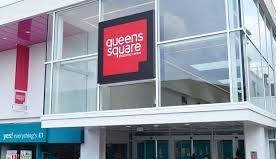 Queens Square Shopping Centre in West Bromwich is set to expand its offering with a number of exciting food and beverage outlets. Expected to open in Autumn 2016, the food quarter forms part of ongoing regeneration plans that began in 2012.

Following extensive refurbishment of the 1970s development, Queens Square has already changed perceptions of the town centre. The introduction of food and beverage retailers forms the next part of the regeneration scheme.

“Our shopping centre has already improved the area in a number of ways including: improved pedestrian links and a higher footfall for the area. These additional retailers will simply strengthen an already up-and-coming area.”

With a projected Autumn opening, the initial selected range of food and beverage retailers include family-favourite brands such as:

Queens Square has said they’re expecting further lettings to be confirmed over the coming weeks.

For more information on the retailers and further supporting materials, call: 0121 553 4694 or email: marketing@queenssquaresc.co.uk.